What will be the impact for consumers, businesses and trade when UAE implements VAT at 5% on 1 January 2018?  The introduction of a goods and services tax (GST) in India on 1 July 2017 prompted similar questions. Will these taxes mean that consumption will take a big hit? 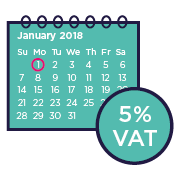 will be introduced at a rate of

in the United Arab Emirates on 1 January 2018

Experts predict a boost to economic growth in both countries once the taxes are fully implemented. The UAE will be able to build on its reputation as a global trading hub linking East and West, and India will continue to modernise its economy, paving the way for increased prosperity in the years ahead.

Both new consumption taxes are being introduced at a relatively lower level compared with other countries such as the United Kingdom where VAT is set at 20%. And with new tax receipts, government can play a major role in oiling the wheels of a modern, globalised economy providing a win-win for the society as a whole.

“You can have a cyclical hit to demand, but then often people get used to VAT, and there is a bounce back in the medium term as long as core supply and demand are favorably balanced.”

That said, readiness will reduce stress and cost.  IT systems, financial management and book-keeping may need adjustment - to ensure compliance. The UAE Ministry of Finance will provide guidance to firms.

VAT will allow revenues to be redistributed to development projects that “benefit society at large and accelerate progress until the UAE reaches the top of global rankings across all sectors”, said His Highness Sheikh Hamdan bin Rashid Al Maktoum, Deputy Ruler of Dubai and UAE Minister of Finance.

In this report we look at how VAT has been introduced in other markets and offer considerations for VAT readiness.

To read the full article fill in details below